Gene Wilder Dies at 83 from Alzheimer's

Gene Wilder, Star of ‘Blazing Saddles’ and ‘Willy Wonka and the Chocolate Factory,’ Dies at 83

I have enjoyed watching this very creative actor on-screen. I was surprised to learn of his passing the other day and that he has passed from Alzheimer's. Adding him to the long list of celebrities and individuals that have died from this disease is so sad.  I found this image of him that shows him towards the end of his battle. Frail, sick, not the "Gene" everyone knew. This is one of the things that happens with the person. Drastic appearance change. Of course he was aging, but I can say from experience the change that happens from Alzheimer's is shocking, and if you have not experienced it yet, when you do it is a shock to the system, because it is something you don't expect to see or happen as part of the disease.  We focus on the mind.  The disease starts with the mind but then ravages the body.  RIP Gene Wilder. You will be missed Mr. Willy Wonka. 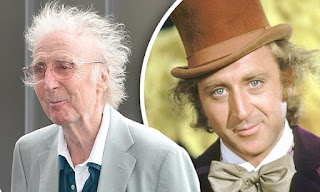