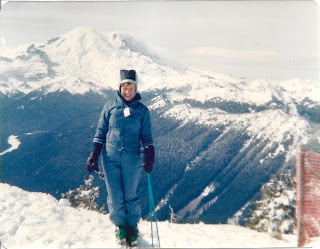 (Grandma Bev-Skiing! One of her favorite things that she loved to do.)
I have longed for and begun parts of the healing process to start since the passing of my grandma. Now a year and half later there are days I still cry, laugh, or smile when I think of her or a memory of us doing something together. Nothing can ever replaced her, however the disease that robbed her still haunts me. 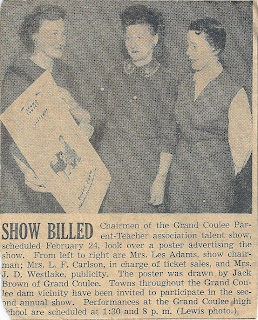 Born July 10, 1928 to parents who were wheat farmers, she longed for a life in the city.   My grandma was a very different kind of woman. She married as a junior in college, had one son, and quickly decided she didn't want do not be married. This was a first for anyone in her family. Divorce. Her parents almost disowned her over it because back in 1953 you didn't do that.  She got her way and moved forward with life. The relationship healed with her parents and she did move forward.  She became a secretary to the general in the Army  in Washington for 25 years before retiring out and she found love 3 times with marriage.
She also found heart break with her own son. The custody battle between her and my grandfather was long, and went to the supreme court in Washington. In the end she got full custody and my father spent his summers with his father and lived the school year with his mom. She loved and cared for him, but in his adult years he chose drugs and alcohol to deal with his depression and bi-polar disorder.  She finally removed him out of her life in 1997.
When I came to know my grandma I was a baby, than a toddler, than a young kid, teenager and a young woman. I came to know her because of her son not playing an active role as a father in my life. He was hooked on heroin and alcohol and she wanted a relationship with the only grandchild she had so she asked my mother if she could care for me each summer while I was out of school as my mother worked 2 jobs to put a roof over our heads to support all of her kids (I came from marriage #2). 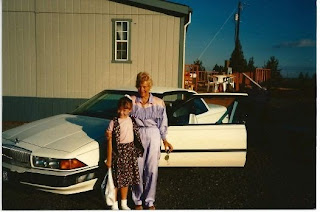 Spending summers with Grandma Bev growing up was magical and special. I was the only grandchild so I got all of her love and attention and also learned of my great-grandparents farming and life. I even helped planned there funerals with her because they didn't pass till I was thirteen.  We grew fond of each other. I could call grandma whenever I was back home, and we always picked up where we left off. We never missed a beat.  In my young adult years she always asked if I was going to "Stay in Nevada?", and I never really could give her a yes or no answer because I wasn't sure what my future held. She would send me cute cards and emails, and we would talk once a week as I began to work the corporate ladder. 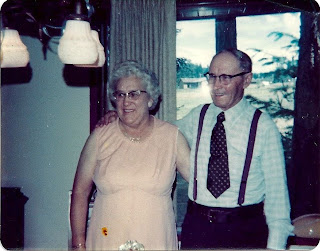 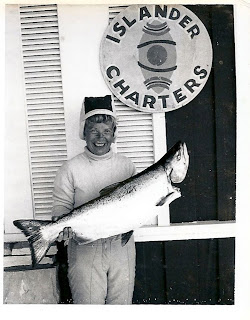 The first time I noticed a change in Grandma Bev I was 24 years old. She had come to watch me in the Nevada Day Parade October 31, 2005, I was the reigning Miss University of Nevada Reno, 2005 and she was a very proud grandma.  We would talk, and she would quickly forget what we were talking about or ask me the same questions several times. When I began to dig deeper into what was happening she covered it up.   I slowly sat back and watched the next several years unravel into an Alzheimer's nightmare.  It all came crashing down right after I had my son May 5, 2010.  My grandma had been making two to five phone calls a day to my cell phone. Each time she sounded a little sadder and couldn't form sentences.   It was apparent that she wasn't getting all the care she needed from her third husband.  I had called several times for welfare checks on the both of them do to age and her progression in the disease.   Her husband unfortunately had a lot of health issues and really couldn't provider her the level of care she now needed.
When my son was about four months old I planned a trip to go see grandma, so she could met her great grandson. I was hoping it would cheer her up. I spent several weeks planning out our trip only to have her husband call me and say "Don't bother coming, I put your grandma in a nursing home." My heart broke and I became hysterical and could hardly tell my husband what was going on.  My husband and I choose to go up anyways and take our son. He knew how much my grandma had meant to me.
Her husband was both shocked and not pleased when I showed up; however he gave me the address to where he had "dropped her off at." I couldn't drive over from her house to the nursing home fast enough.  When we got there the staff was shocked to find out she had a grand-daughter because her husband mentioned no family members. They were happy to see me and quickly showed me to the lock-down ward of the nursing home she was in (which being a mother of a 4 month old I was not prepared for). 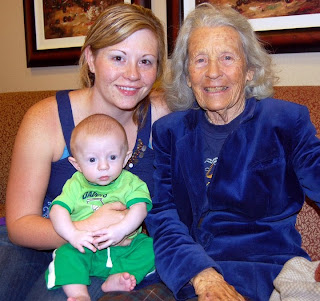 (Trying to smile through tears after seeing her in the nursing home for the first time)
There she was with her face pressed against the glass door that was locked by a key pad.  Her hair was messy and she was wearing a t-shirt with a long skirt. She looked disheveled, weak, frail and old. I began to sop uncontrollable as I hugged her. The staff all encouraged me, but I honestly was heart broken to see her like this. This was not the grandma I knew. Who skied until she was 77 years old, and who walked or hiked daily on average of five to ten miles.  This was Alzheimer's robbing me of the one person that had loved me and treated me and taught me respect. Changed my diapers as a child and now she was in diapers.
I quickly hired an attorney and filed a motion to be the guardian over my grandma Bev. The attorney told me, rarely is it possible to get custody of a person who is married. I would have to show evidence of her not getting care that she required with her progressed disease with Alzheimer's.  I was able to prove my case in court and won full custody of my grandma Bev on a emergency notification.
Her husband passed away not long after our court battle from lung cancer. Grandma Bev was still in the same nursing home being cared for. I wanted and longed to bring her to Reno but it was advised not to move her since she had settled into a place and could quickly disrupt her and put her into a depression with the Alzheimer's.  I ached to have her closer to me and my son. I called weekly to check on her and sent packages to her every two weeks. She was doing well. Eating. walking the halls in the lock down unit and would ask for Brooke, it was the day she took a fall that I knew her life was finally coming to the end.
The nursing home reassured me she was fine, but four months after the fall I received the call the end was near. Grandma Bev had gone to bed the night before and would now not wake up. Hospice had been called in. I drove up that Monday night February 20,2012 from Reno, Nevada to Redmond Oregon, praying for her not to pass while I was in root.  She waited for me.
When I got there I tried to wake her. She opened her eyes and said "Barry". This was her son. I knew in my heart I need to help her get closure with him. I was able to track him down. He was living in a closet of a motel in Berkley, California. He asked if he should come up to Oregon and I told him, that was his choice, but I was not leaving grandma's side.  He chose to speak to her on the phone. Her face lit up and moved around a bit as though she was trying to talk back to him, but nothing came out of her lips. That made me feel good that I was able to bring her some closure with her son.  I stayed with her each day and night until I felt her pull me to her on February 24, 2012 late in the afternoon. She took her final breathe in my arms as I was rocking her.  I watched her beautiful soul leave. 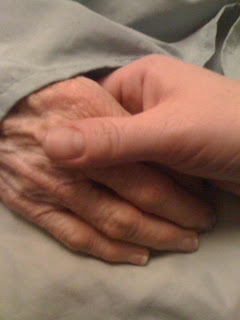 (A photo of our hands together the week she passed away)

I try not to think of the last couple years of her life, because they are all very painful to remember. I try to think of all the things we did together. I really miss her and I laughing together, but more importantly I missed her long before she left this earth.  As I finally began to work through the grief I chose to offer free portraits to those diagnosed with Alzheimer's or ones that are suffering from Alzheimer's through my photography business (BMW Photography). It was embraced by my local community on the news and I paired up with the location Alzheimer's Association Chapter of Northern Nevada & California. I wanted to make sure the loved ones photos were remembered as well as their story. I tied it together with a blog called "Remember My Photo". http://bmwphotoproject.blogspot.com/
Posted by Brooke M. Westlake at 10:00 PM