Barbie in a Box attends Halloween Themed Hilarity for Charity-2016

What did I dress up as for the amazing Hollywood party Hilarity for Charity that kicks ALZ in the ballz? Barbie in a box! I created Barbie in a box 2 years ago. It was a hit, so she came back to life for this amazing night hosted by Seth Rogen and his wife Lauren Miller-Rogen. This years event didn't disappoint, and it never does. Each year it seems to get better and better.
This year my journey to get to the event was a wee bit of a challenge.  I had a flight out of my home town of Reno, Nevada on Friday October the 14th, however my flight on Jet Blue was cancelled due to the giant storm we were having and (oh yeah our new house we bought in January of 2016 was on standby for evacuation for a giant fire. We are blessed, our home is okay. 23 homes were lost.)  Thankfully I was able to get a 6:50pm Southwest flight with a boarding pass of A1. (I thought that was a boarding pass myth.)  Arrived to Los Angeles and made it to bed at 3am to be up at 5:30am on Saturday morning because I booked a very special and very important photo session with the Dodson's family and their beautiful daughter Kennedy.  That blog piece will be coming soon. You won't want to miss it.

Later on Saturday, I actually thought I might get a nap in before the fun filled night but that did not happen as their was too much excitement and prep time to get Barbie in a box to life for the night.


My friend Steven came with me to this years HFC fundraiser. He went dressed in a "Doctors" T-shirt. The funny thing is he is actually a Doctor...  We showed up right on time at 6pm to enjoy the VIP treatment.  When I walked through the metal detector.   I set it off 4 times... lol Barbie doesn't come packing to a party but apparently my bling dress and my bling earring were making it go bonkers. Nikki and her family were just passed security area teasing me for setting the metal detector off. Yes, I know sometimes I cause trouble... lol

Finally once in, Steven and I got our VIP wrist bands and headed to the food trucks to get some yummy food, sip on some drinks.  My favorites were the chicken tacos, pulled pork and fried macaroni and cheese balls, complemented with a nice pinot. Then the most awesome thing happened, I got the unexpected pleasure of meeting the beautiful Lauren Miller-Rogen and....... she knew who I was!!! Chatting with her was a true highlight of my night because I have always wanted to meet her in person. The whole reason HFC was put together is because of her and her husband. Lauren has personal experience with this cruel disease.  I admire, respect and like the fact that instead of struggling quietly with her experience (as some do), Lauren and Seth took action. They took action by putting HFC together to raise
monies needed.  Where does the money go? It's going towards helping the research efforts to find a cure for Alzheimer's and its going towards families that are struggle to make ends meet while taking care of a loved one that are sick.  My heart truly breaks for her family because she has the personal experience of her mom whom is living with Alzheimer's.

Lauren is just as beautiful in person as she is on camera, and you can tell right away that she has a really big heart.

Like Lauren and Seth I have my own personal experience with Alzheimer's, and that is why I support HFC.  Plus I get to meet some pretty awesome individuals while raising money.  And these awesome individuals are also helping raise money for the cause.

When I was dealing with my grandma I was sad, embarrassed, and confused. I did not know anyone my age that was dealing with this disease.  I did not mention it to many friends and other family members because I thought they would say things like "your grandma is old" "old people get that disease".   Needless to say, when I mentioned it to friends and family they had compassion for me and Lauren was no different. I shared with  Lauren that I was my grandma's primary caretaker. She said to me "You are so young". (Lauren <3 Thank you for that... I am aging gracefully and my secret.... I use lots and lots of wrinkle cream, but yes I was somewhat young.  I was 29 when a giant part of my world came crashing down where I had too make very critical decisions for the care and wellbeing of my grandma Bev. Also at the same time I had just given birth to my son. It was the worst time of my life, emotionally and financially.  I was trying to cope with grief and postpartum depression.  The grandma that raised me could no longer talk.  She couldn't hold her great grandson. She couldn't come celebrate in the joy of me getting married or joining the motherhood club.  She could no longer tell me funny stories to make me laugh.  She was gone in her mind, but locked in her body.  My only saving grace to this day is that she only suffered for 10 years, the last 4 years were the worst. I say only suffered for 10 years because I have heard of other individuals suffering for a lot longer of a period with Alzheimer's before they die.  The first 6 years of her being sick were more of a challenge.  When she did pass away with me holding her, as painful as it was, I felt like their was finally a sense of relief. She was free. 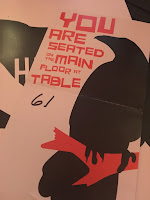 The show began with Seth Rogan and singer Nick Petricca busting out Michal Jackson’s “Thriller”. For two white boys I thought both Nick and Seth pulled it off quiet well. It simply wouldn’t be a Halloween party without the Thriller song, and it wouldn't be a big party with Seth Rogen if he wasn't dancing and making people laugh.

Later a surprise duet took place by Joseph Gordon-Levitt and his wife Tasha McCauley. Joseph Gorden-Levitt is the adorable actor who played on show 3rd Rock from the sun. Most recently he was the main actor in true story on Edward Snowden. I have always enjoy his movies. In their bloody out fits, he and his wife sang  their version of “Time Warp”.  They nailed it.  Singing entertainment was also performed by Courtney Love and Nick Petricca.  Nick Petricca also took to the stage to share with the audience why he supports HFC. His father has Alzheimer's.


Than came my favorite part of the night. Comedy.  Our comedy relief was brought to us by Morgan Murphy, Jen Kirkman, Marc Maron

The biggest surprise for the night was Los Angeles Dodgers Infielder/Outfielder Howie Kendrick donating  $100,000.00 check for HFC. While Howie could not be there to present the check, he did make a video that was played for the audience. The live auction is always entertaining because the two auctioneers provide live commentary to engage the audience, pull in the bucks and provide more laughs.

Other entertainment included a Magician performance by Justin Willman. While he is a magician he is also funny.  He showed the audience a card trick with a balloon.  He than gave us the secret to the card trick because as he said “people can google it”.   Seth Rogen’s multiple costume changes through the night were comical. My favorite costume change was him and his wife dressed like each other.  Lauren tried to do an impersonation of Seth. It was pretty cute.  While on stage Seth and Lauren shared testimonials from members in the local community whom had received help through HFC.  They also played a phone message from a lady whom had received help from HFC. It made me tear up.  You could hear in this woman's voice how thankful she was for the support she had received from HFC.

To close down the show came in true Hollywood style with Snoop Dogg rapping, The Next Episode, Gin & Juice, Drop it Like it’s Hot, and Young, Wild & Free. I was right in the front of the stage and Snoop even said “To the Beauty Queen”.  I have been listening to him since I was a teenager. My husband adores him and was telling me interesting facts about Snoop Dogg. For instance, did you know that Snoop Dogg makes more money these days doing speaking appearances? It’s because he is a savvy business man and rapper.  I have never been to any of his shows, but his performance and the smoking joints on stage were pretty priceless. Everyone in the audience was super chill and I think that topped off their night for the Halloween Hilarity for Charity 2016 event.

Honoree Hollywood guests that also attended the event this year were:


Johnny Galecki-Actor. Notable role as the adorable Dr. Leonard Hofstadter on the Big Bang Theory. OMG! I would have loved to get a photo with him. My mom loves him.

The show concluded with Steven and I hanging out at the after party. There I met a man dressed as Barbie! So we had to take a photo together. Although he tried to take my box. lol.

2017 will be just as grand as this year, but honestly the highlight of my whole evening was meeting Lauren Miller-Rogen. Getting too personally thank her for her and her husband putting this event together and bringing light to Alzheimer’s for our generation is a big deal! Our generation will be the one to find a cure.  As the baby boomers retire in mass numbers and the numbers of people diagnosed with Alzheimer’s spike, it will be up to us to help our family, and our friends get through the dark days when dealing with Alzheimer’s.  Part of that help comes from people like the Rogen's who have gone above and beyond for this cause by putting their heart and soul into it. Last I had heard the event had raised $1.7 million! Great job HFC!
#endalz #remembermyphoto #beverlyjean #barbieinabox #bmwphotography #photographybmw #alzheimers #HFC #HFCHalloween #forthecause #kickALZintheballz #alzheimersassociation #alzheimersawareness #hope #purpledignity #aworldwithoutalzheimers
#alzheimersfight #alzheimersdisease  #grandmabev  #alzheimerssucks #kickalzintheballz #hilarityforcharity #hilarityforcharity2016 #hilarityforcharityhalloween  #purpledignity #barbieinabox #beautyqueenbarbie