My blog post piece of this past weekend's Hilarity for Charity-Halloween, will be up in the next couples; however here is a quick update on monies raised and some of the events that took place for the fantastic night.
Hugs-Brooke 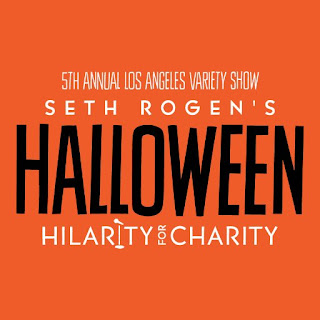 Information contained on this page is provided by an independent third-party content provider. Frankly and this Station make no warranties or representations in connection therewith. If you are affiliated with this page and would like it removed please contact pressreleases@franklyinc.com
SOURCE Hilarity for Charity
Annual Event Headlined by Snoop Dogg Brought Out Hollywood's Finest to Raise Funds to Fight Alzheimer's Disease
LOS ANGELES, Oct. 17, 2016 /PRNewswire/ -- The 5th annual Los Angeles Hilarity for Charity® (HFC) Variety Show hosted by Seth Rogen and Lauren Miller Rogen raised over $1.6 million to help families struggling with Alzheimer's care, increase support groups nationwide, raise awareness of Alzheimer's among the millennial generation and fund cutting-edge research. Entertainment icon Snoop Dogg headlined the Halloween-themed variety show, which was held on Saturday, October 15th at the Hollywood Palladium and featured a jam-packed night of comedy and musical entertainment.
The night began with an outdoor VIP reception where guests gathered for cocktails and delectable bites including beverages from Crown Royal and LaCroix. Once attendees made their way to their seats, Seth and Nick Petricca(Walk the Moon) started the night off with a memorable rendition of Michael Jackson's "Thriller" for the variety's show opening act.
Following their performance, comedians Morgan Murphy and Jen Kirkman gave fast-paced, high-energy performances and magician Justin Willman left audience members entranced.
Lauren Miller Rogen then took the stage to remind guests of the mission of HFC, which was established in 2012 as part of the Alzheimer's Association®.  Lauren shared testimonials from HFC community members who have received free in-home care for loved ones through HFC's Alzheimer's and Dementia Care Relief Grant Program in partnership with Home Instead Senior Care.
Then, James Corden took the stage for a lively auction featuring prizes including buyouts of Son of a Gun and Animal restaurants, a glamping weekend, a Paris getaway and more.
One of the highlights of the night came in the form of a video message from Los Angeles Dodgers Infielder/OutfielderHowie Kendrick, who announced a generous $100,000 donation via the Los Angeles Dodgers Foundation to help further HFC's mission and fund Alzheimer's research.
"Alzheimer's is a cause very close to our family, and we're proud to support the great work of Hilarity for Charity and the Alzheimer's Association to accelerate research, as well as engage a younger generation in the fight against this horrible disease," said Howie Kendrick. "We look forward to continuing to support this work and raise awareness," added his wife, Jody Kendrick.
Other evening highlights included a surprise performance of "Shut-up and Dance" by Nick Petricca, a duet fromJoseph Gordon Levitt and Tasha McCauley, a rendition of "Time Warp" by Courtney Love and the evening's final comedic set delivered by the hilarious Marc Maron.
The already epic night concluded with an unforgettable performance by Snoop Dogg who entertained with some of his iconic hits, including "The Next Episode," "Gin & Juice," "Drop it Like it's Hot," and "Young Wild & Free."
"Each year we set out to put on an entertaining show and take people's money so we can help those who need it," said Rogen. "This year, with the help of some very generous and talented friends, we've done just that!"
"I'm always amazed at how well the show comes together each year," said Miller Rogen. "We are so thankful for the many people that lend their time and effort to support those affected by Alzheimer's disease."
Notable guests who supported the cause for the evening included, Elizabeth Olsen, Scott Eastwood, Maria Shriver,Katie Stevens, Tony Hawk, Katie Lowes, Ben Feldman, Adam Shapiro, Frances Bean Cobain, Kunal Nayyar, andJohnny Galecki among others.
Rogen and Miller Rogen established the Hilarity for Charity Fund in 2012 as part of the Alzheimer's Association, through which monies raised are directed to help families affected by Alzheimer's care, increase support groups nationwide and fund cutting edge research. The flagship Los Angeles Variety Show continues to create the next generation of Alzheimer's advocates through an evening filled with music and comedy.
The evening was made possible by the generous support of several individual and corporate supporters including: Netflix, Fast Rabbit, Crown Royal, Home Instead Senior Care, Rivet Revolution, BMW Beverly Hills, Good Universe, LaCroix and United Talent Agency.
About Hilarity for CharityIn 2012, Seth Rogen and Lauren Miller Rogen (along with some amazing friends), created Hilarity for Charity (HFC), a movement to inspire change and raise awareness of Alzheimer's disease among the millennial generation. They later established the Hilarity for Charity Fund as part of the Alzheimer's Association, through which monies raised are directed to help families struggling with Alzheimer's care, increase support groups nationwide, and fund cutting edge research. Since its inception, Hilarity for Charity has raised over $6.5 million to support these efforts. Through evenings filled with music and comedy, the flagship Los Angeles Variety Show is creating the next generation of Alzheimer's advocates.  Join the online conversation by using the hashtag #HFC, and following Hilarity for Charity on Twitter (@Hilar4Charity), Instagram (@hilarityforcharity) and liking us on Facebook.com/hilarity4charity. For more information, hilarityforcharity.org.
About the Alzheimer's Association®The Alzheimer's Association is the leading voluntary health organization in Alzheimer care, support and research. Our mission is to eliminate Alzheimer's disease through the advancement of research; to provide and enhance care and support for all affected; and to reduce the risk of dementia through the promotion of brain health. Our vision is a world without Alzheimer's. For more information, visit alz.org®.
For Media Inquiries
Posted by Brooke M. Westlake at 7:30 AM